You can find some of the latest events around the club here.

For the usage on the IARU region 1 SSB fieldday in 2016 with DL0DX/p, we had built a new antenna, which we wanted to use for the first time. In order to have time for testing, setting up the shortwave station in the DARC district R trailer on our fieldday site started a few minutes earlier than the previous year. Holger (DL5KUT), Hans-Georg (DL6WA), Andreas (DC4AB), Marc, Daniel (DM3DA), Fabian (DL1KID), Stefan (DB1KL), Kai (DL3EAZ), Manfred (DH9EO), Christoph (DO4TIF) and Jochen (DG8EF) collaborated establish the setup, so we were able to try out the new Fieldday antenna one hour before the start of the contest - a multi-band light-weight dipole for 80 to 10 meters powered by a chicken ladder. It was unfortunately shown that the carefully planned and built antennas did not work - the standing wave ratio on the contest bands was unexpectedly bad and could hardly be adjusted. So after a short consideration, the new antenna was cleared again and the precautionary antenna from previous years rebuilt - also a dipole fed over chicken ladder.

The expansion conditions were not good, but the operators Holger (DL5KUT), Fabian (DL1KID), Daniel (DM3DA), Andreas (DC4AB), Kai (DL3EAZ), Oliver (DK7TX) and Dieter (DL2GK) maked an effort. And thanks to so many radio operators, the shifts of the twenty-four-hour competition could be quite short this time.

A few meters next to the short wave station a tent with a 2 meter station with two stacked Yagi antennas was set up, in order to be able to participate in the simultaneous running 145 MHz September Contest alongside the shortwave contest. There was also a gas grill, which was provided for the physical welfare of those present.

For the power supply we used for the first time a sound-insulated, very economical benzine generator with downstream inverter, which generated a AC voltage with very clean sine wave. For approximately 25 hours of operation, the barely audible generator used only 15 liters of fuel. Next to the shortwave station an interruption-free power supply (on-line UPS) from Fabian (DL1KID) was placed, intercepting short-term current spikes.

While the Saturday was still sunny, a thunderstorm arose on Sunday morning, which approached unexpectedly, despite careful observation by the users. This forced us to stop the radio operation for about an hour because of the danger of a lightning strike, and wo looked for protection in our cars.

Burkhard (DO8EW) came to the dismantling, so that with combined forces everything was dismantled, invited, brought to the club station DL0DX and was unloaded within two hours. 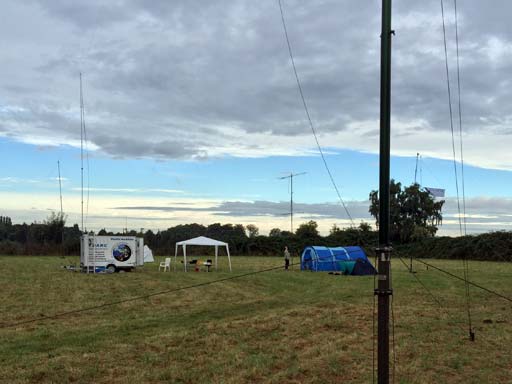 Operators were Rudi (DL1EHR), Michael (DL5JS), Thomas (DK2TS) and Dieter (DL6EZ), Mirko (DM1EM) and SWL Maximilian helped building up the set. To allow Maximilian first steps regarding radio practice, an FM station was built, consisting of an IC-821 H (2 m/70 cm radio) and a 4-element flexayagi. Maximilian could be heard under the callsign DN3AA/p (training callsign of DL5JS) in "IARU Region 1 145 MHz September Contest". It has made him a lot of fun (the RF virus is activated now), the furthest connection succeeded 582 km by G8W.

On Saturday night at about 7 pm, we were visited by DF8QB, called "Power-Willi". He was commissioned by the fieldday manager DK2OY go to control various fieldday stations to see if everything was done properly. Of course, DA3X/p was rule compliant in the air, which Willi then could forward to Manfred (DK2OY). 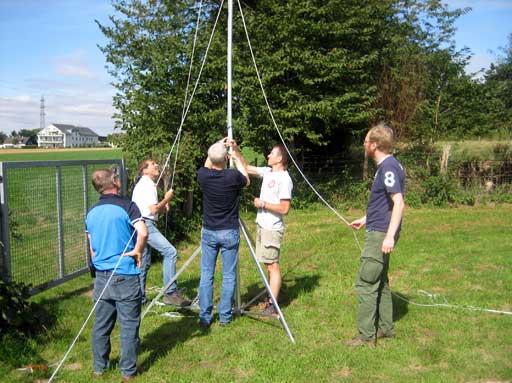 Once again it could be a few more QSOs, but the conditions were simply "rotten". Thank God, in the night the storm moved past us north and south, so we did not have to interrupt the operation.

Conclusion: It has been fun times again and it was all a harmonious fieldday weekend.

Lothar is the first of our course who passed his exam (on 6 August 2016). His new callsign is DO2LKG. Congratulations! "The exam isn't too difficult. The examiners in Dortmund are very friendly.", says Lothar.

Supplement: On 5 November 2016, Lothar once again gone one better and passed the class A exam. Its call sign is now DL1LKG. 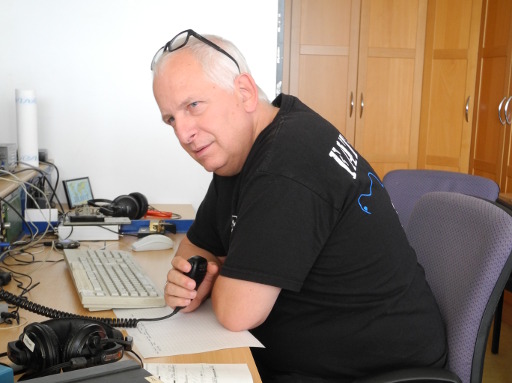 The VHF station is working again. A first tests resulted in good signals from Switzerland and the Black Forest. ODX was HB9KAB in JN47pd (485 km). 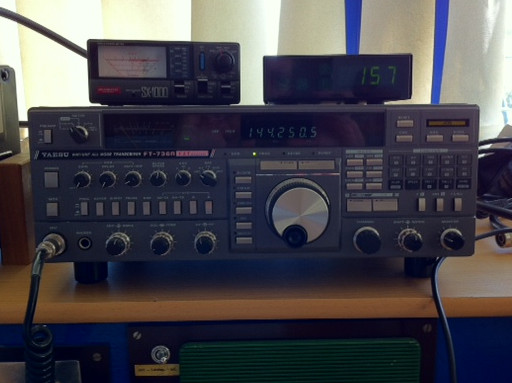 During his holidays on Thasos Island, Hanns-Georg (SV8/DL7NY) kept in contact with DL0DX. Every Sunday morning, he reached us on 14 MHz in SSB. "The signal quality was better than the mobile phone.", said Daniel (DM3DA). Thasos Island is part of IOTA group EU-174 (KH20hs). 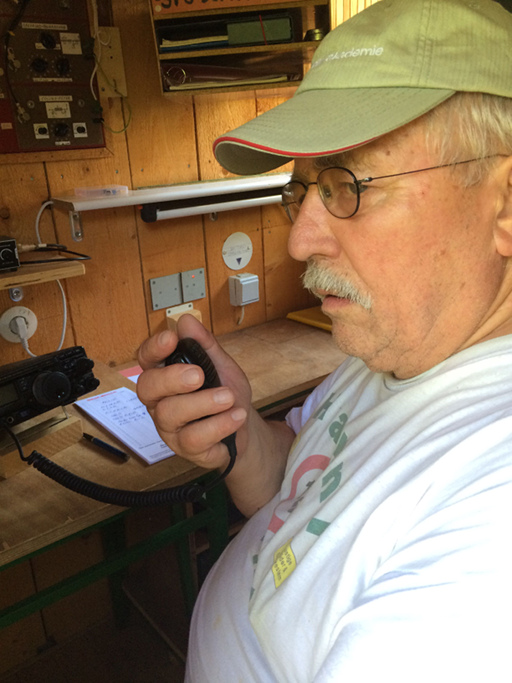 Setting up the station for 144 MHz

We are currently not QRV for 2 metre SSB. But we are working hard to get the station operational again. 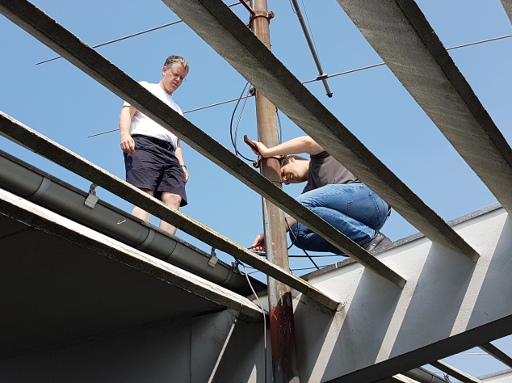 The club R01 also participated with DA3X/P on the CW field day. The focus was not so much on socializing, but on winning the competition. In a quiet, fenced area between Haan and Solingen the team entered on the 24-hour IARU Region 1 field day in the class "portable, multi operator, low power, non-assisted". Operators were Dieter (DL6EZ), Michael (DL5JS) and Roland (DL1EAL, from R04). They also had luck with the weather. A strong thunderstorm with hail passed narrowly. With 838 contacts the claimed score was 336,896 points at place 18 in Germany and place 1 in District R. 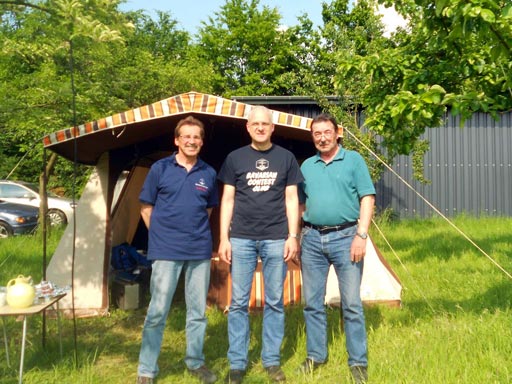 Our CW field day was great fun. For Andreas (DC4AB) and Robert, the field day started as early as Thursday, when they cut the waist-high grass. Otherwise, accessing the site would have been very difficult. 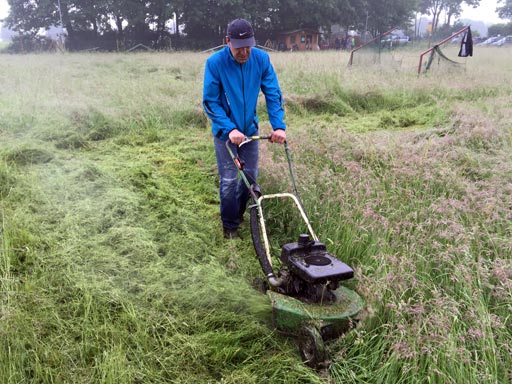 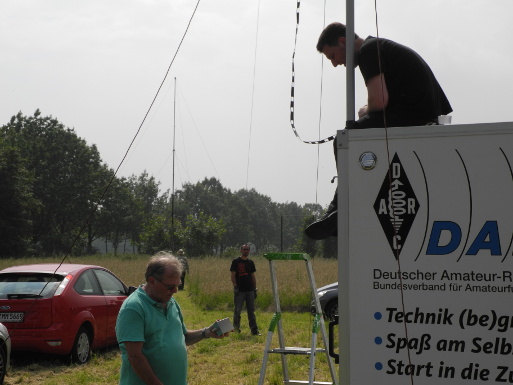 Setting up was really fast. Half an hour before the start of the contest, DL0DX/p was operational on HF and VHF. The sun was burning, and ice pops were welcome refreshments, as was cold beer. The BBQ was up and running soon and Andreas provided us with delicious bratwursts. We even had cherry pie and coffee for desert. 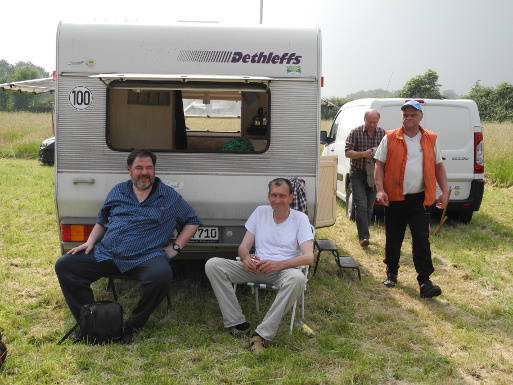 The HF station managed to get 670 contacts into the log. VP8NO from the Falklands Islands was one of the highlights. We also showed the station to visitors. 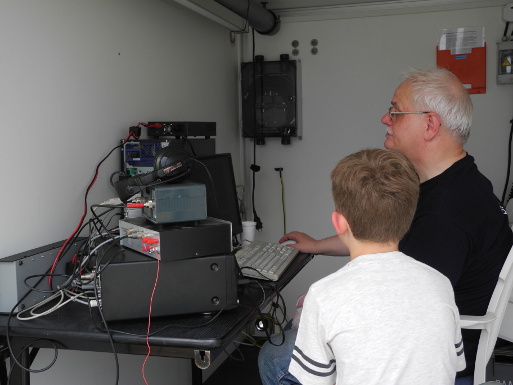 The tent next door offered the opportunity for voice contacts on VHF. We had a mast with two stacked yagis and an ICOM IC-7000 with 50 W output. Best DX was with F5KCZ/P, 578 km away on the north coast of Brittany (locator IN99pi). In total, we got 29 contacts in the log of DL0DX/p, DN3DA/p and DM3DA/p. 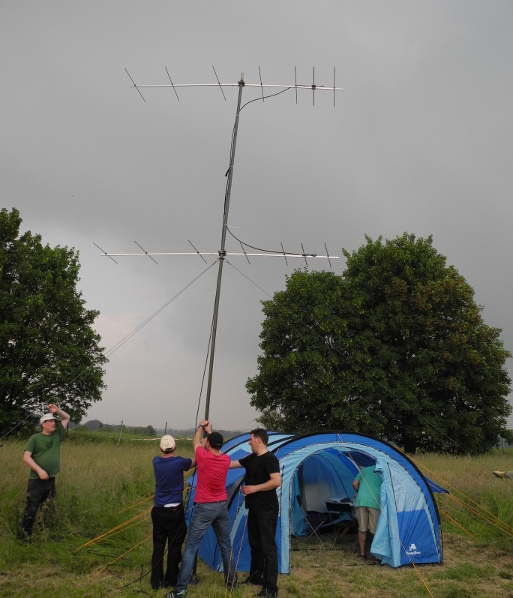 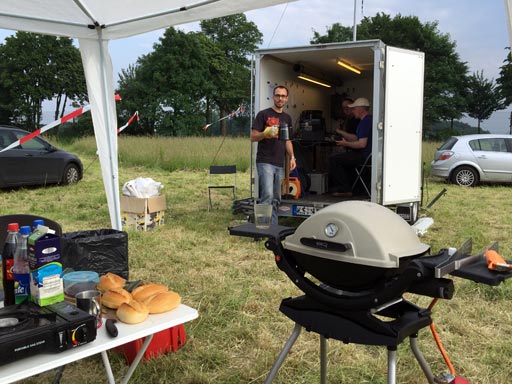 Thanks to all participants and visitors, especially to Frank who brought the fab caravan and to Johanna and Margot for the yummy cherry pie.

Islands On The Air: Vido activated for the first time.

Our member Oliver (SV8/DK7TX) operated from the Islands Corfu and Vido (aka Ptychia Island). Both islands are part of the IOTA EU-052 group. A search in the database of rsgbiota.org found no previous activation of Vido Island. Oliver made 400 contacts from the islands. Congratulations! 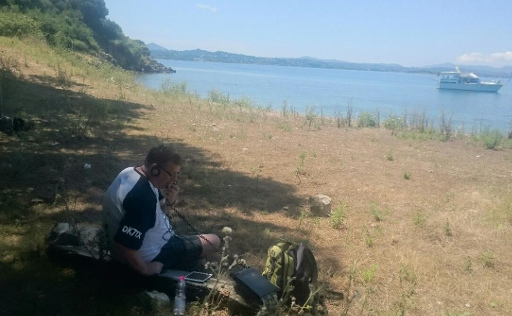 We have reached the halfway point of our class.

On 7 June 2016, we were half way through our "Klasse E" course. This achievement was marked with fresh cheese pastry (thanks Andreas, they were really good!).

Currently, we are 8 active students and 4 teachers. The theory course is combined with an intensive 1:1 praxis course in the club station. Should you hear DN3DA on the air, please give us a call!

It is still possible to join the running course. More information here (in German). 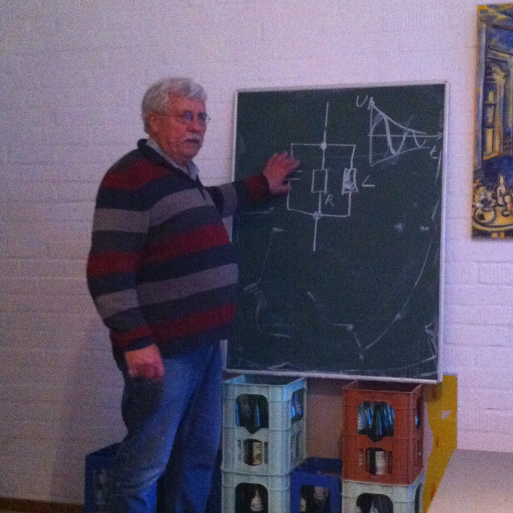